Author:  Rev. Dr. Victoria Marie is priest/pastor of the Our Lady of Guadalupe Tonantzin Community Society and co-founder of the Vancouver Catholic Worker (Samaritan House). 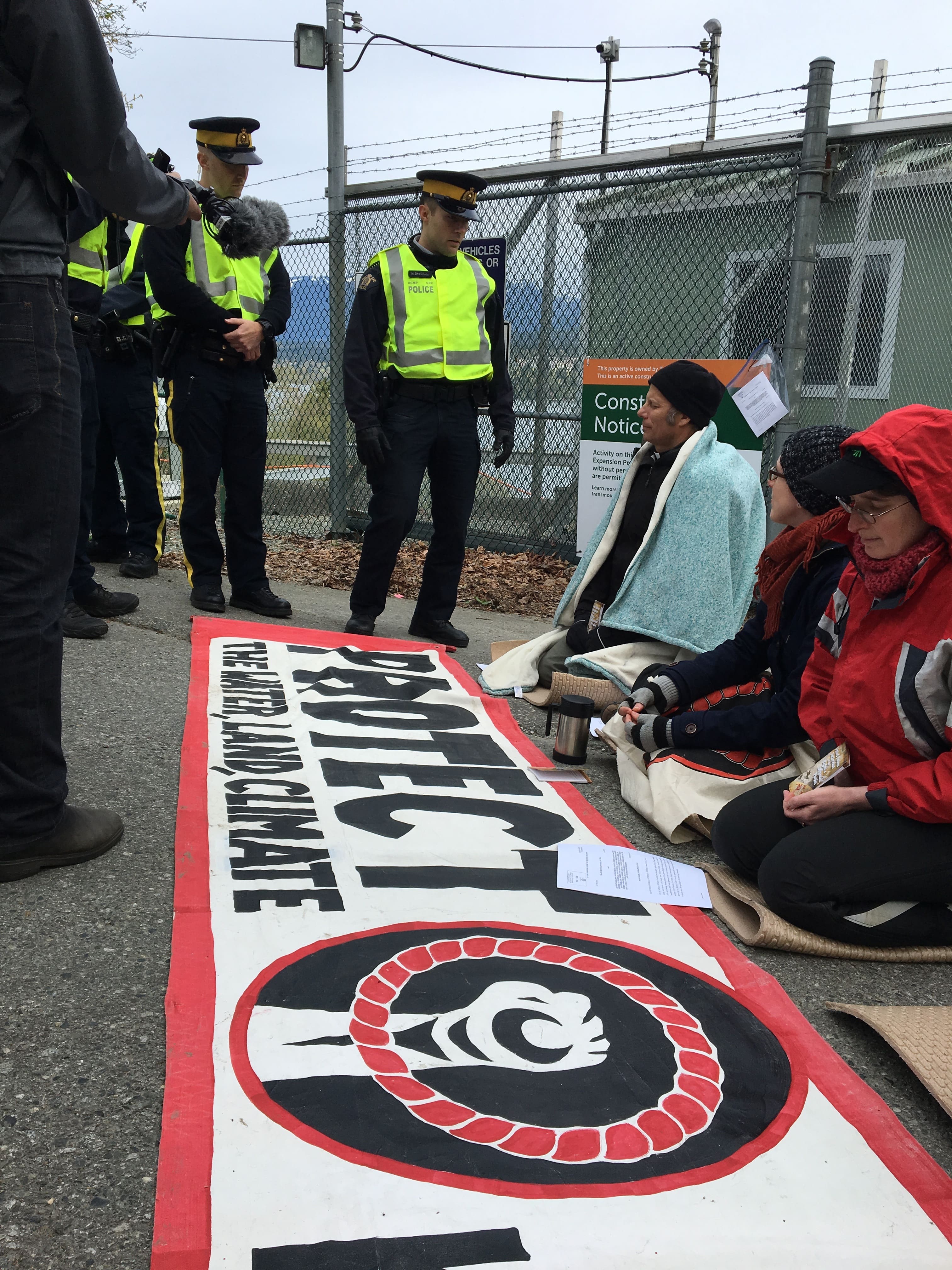 Two streams of thought intertwined with my reflections on the non-violent direct action taken by several faith leaders on April 20th, 2018 at the east and west gates of Kinder Morgan’s Westbridge Marine Terminal.

The first is the current upside down political and social climate is not unique to our neighbours south of the border.  It appears that reconciliation with Indigenous Canadians and the Earth have become criminal offences.  When reconciliation becomes meaningful action, that is, goes beyond mere words.  It threatens the powers—and they react.  Injunctions against peaceful protest is the weapon of choice.  Violations of the UN Declaration on the Rights of Indigenous Peoples, the U.S. Eagle Act[1] and the BC Wildlife Act are committed with impunity.

The second stream of thought was influenced from Psalm 98, which conveys the message the seas and all the fill it, the earth and all those who live in it are included in the household of God.  Therefore, when in the Gospel Jesus says “This is my commandment, that you love one another as I have loved you.  No one has greater love than this, to lay down one’s life for one’s friends.  You are my friends if you do what I command you.”[2]   Jesus is making an inclusive statement.

My purpose here is to describe the situation with Canada and Kinder Morgan (KM).  Secondly, to explore the faith leaders response as, not just a political action, but an act of inclusive gospel love.

Canada was one of the last three nations to sign on to the UN Declaration on the Rights of Indigenous Peoples (UNRIP).  As a signatory nation, Canada has agreed to adopt and respect the principle of free, prior, and informed consent of Indigenous Peoples in all matters covered by their specific rights and to obtain their free and informed prior consent when the preservation of their cultural resources, especially those associated with their way of life.  By approving the KM pipeline, Canada violated this principle with regard to members of the Tsleil–Waututh and other coastal First Nations of BC.  This makes KM’s continued pipeline preparation and building activities also violations of UNDRIP.

Kinder Morgan’s Environmental, Health and Safety (EHS) policy statement claims, “Kinder Morgan’s policy is to comply with all health, safety, security and environmental laws, rules and regulations, not just because it is legally required, but also because we believe it is the responsible way to conduct our business and to promote greater environmental responsibility.[3]”  In contradiction to this, their workers at the Westbridge Marine Terminal have  put a metal casing over an eagle’s nest to prevent a pair of eagles from accessing their nest.  This is clearly a violation of the BC Wildlife Act, which states: “A person commits an offence if the person, except as provided by regulation, possesses, takes, injures, molests or destroys” a bird or its egg, the nest of certain birds, including eagles, or any nest occupied by a bird or its egg.[4]

Canada and Kinder Morgan act with impunity sanctioned by apathy.  However, apathy is not a universal trait and people protest the pipeline.  Kinder Morgan responded by acquiring an injunction to protect them from non-violent acts of protest.  Having seen they are not alone in their objections, members of the Coast Defenders, asked for faith leaders to stand with them to protect their land and waters.  The action on April 20th was the prelude of the larger action on April 28th.   Sixteen faith leaders responded, two coming from as far away as Winnipeg.

Like, Father John Dear, these protestors have a “vision of peace, nonviolence, and the new creation, the vision of the promised land before us, the practice of proactive nonviolence, that offers a way out of environmental destruction, as well as permanent war, corporate greed, systemic racism, and extreme poverty.”[6]

When we say we believe in the sanctity of all life, that includes non-human life: the creatures of the sea and the birds of the air.  It also includes human livelihood.  Overriding it all is the desire to follow Jesus’ command to love.  That is why at the gates of Westbridge Marine Terminal we prayed for justice for our Indigenous brothers and sisters and for Kinder Morgan workers, we prayed for the Eagle pair evicted from their home.  We prayed for the Earth and her waters.

That day, three faith leaders joined the growing number of people arrested for living into reconciliation.   Regardless of governmental apologies and promises, living reconciliation has become a criminal offence.  Undeterred, our peaceful protests will continue.  We believe, like Martin Luther King Jr., that “the arc of the moral universe is long, but it bends toward justice.”  So, motivated by gospel faith and love, we continue to work to make reconciliation a generally accepted reality.