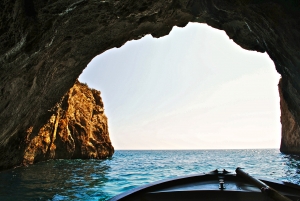 Photo by Sarah Crutchfield on Unsplash

Some have known their ‘path’ from an early age, and followed through on their plan. For others with limited resources, unable to pursue original goals, it left them to work through uncharted waters in trust. I was in that second category. I may not have known where I was headed, but my constant prayer was for the gift of discernment to any opportunity presenting itself; through what someone said, a news piece that came up, someone entering my life, a strong urge to speak to someone in particular, and so many others. This has led to many unexpected turns, but I’ve held through to one key piece of advise from a mentor, ‘if a door opens unexpectedly, enter it, and give it your best’.

Eventually, I was led to my iconography, following a strong impact of Greek icons upon me, and the need to learn more. There were no courses at the time and so I scoured all information on the sacred art form, its theology, and techniques, learning through trial and error. But here’s the crux. I was a French Canadian Latin Rite fellow, now steeping himself in the Byzantine and traditionally Orthodox form. The language and traditions of iconography spoke to me. And being very aware of who I was and who I wasn’t, I stayed close to the accepted norms and libraries of the traditional icons.

Opportunities presented themselves, starting with a series of icons for St. Edmund’s Church in North Vancouver. It did meet with a bit of resistance, as not belonging in a Catholic Church, but was appreciated overall. Following a move to Alberta out of necessity, I was led to a series of icons and murals within a few Ukrainian Catholic Churches. At the time, my not being of Slavic descent wasn’t a concern given the past historic aid from the pioneer French Catholic clerics. I was filling a need for these communities at the time, until an influx of Slavic iconographers started, taking up my place. It was heartbreaking, but I understood that it was a necessary renaissance for the Ukrainian community. Following the closure of this door, I eventually started receiving some requests from western Catholic Churches once again.

One life lesson learned through the years is hindsight, especially when there is no clarity in what lies before you. Hindsight sheds light on how the journey hasn’t been as haphazard as you thought, and makes clear the connections that were there all along. I also kept to heart a former pastor’s saying that we were like honey bees, instinctually going where we need to be.

A recent unexpected change in path in my uncharted waters, are the First Nations Icons. Rev. Garry Laboucane opened a conversation around the need for a First Nations icon. It was based on my experience and my affinity and deep respect for First Nations Cultures, something that has unexplainably always been within me.

I was at first unsettled as it was asking me to enter another door, a variation of traditional icons while being true to First Nations. Could I honour both and keep the icons theologically correct and prayerful. I needed to find that ‘bridge’ which would 1) give me permission to do this work and 2) inform my journey in keeping the icons true and such that First Nations peoples will see themselves within. I am deeply grateful to Rev. Laboucane who understood this and kept the conversation going until I reached that ‘aha’ moment when I could see the bridge, and grateful that Rev. Laboucane would be my guide in seeing traditional Christian imagery through First Nations eyes and spirituality. 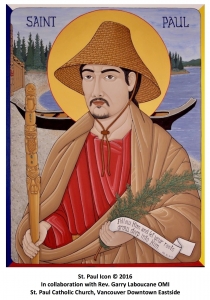 The first icon was of St. Paul, set within a West Coast Cultural imagery. It would present Paul  as a Coast Salish man, ‘the Teacher/Messenger in the act of  journeying’, so that ‘the Coast Salish and Indigenous Peoples can see themselves within the icon as bearers of the Good News and as having a shared experience of St. Paul within their church’. The icon is strongly set within numerous symbols which resonate; the talking stick, the canoe set for another voyage, garment colours, Cedar hat, and cedar bough and parchment with the inscription of Paul’s “Follow Him and let your roots grow deep into Him” Col.2: 6&7. 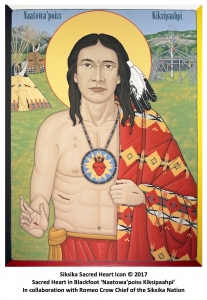 The Sundance has a long preparatory period before a candidate is deemed ready, which brought to mind Christ’s 40 days in the desert. The critical element of the Sundance is that it is a personal sacrifice on behalf of the community, and a lifelong 24/7 commitment, in service to the community. I came across an article by John Woodward (2014) in which he added,

“ How important is it that the Lakota people know that Jesus is for them and to understand that He did suffer in His incarnate body in a way that Lakota people can relate?” The article was about the Lakota, but still so pertinent for the Blackfoot, and all First Nations.

The icon includes the Sundance and the Pascal sacrifice as two separate events, with the Sundance scars on His chest and the stigmata. Its setting depicts a camp of tepees with Siksika designs, a Sundance structure, Christ is wearing a Pendelton from the Crow Chief family, and His Plains eagle feathers based on how Chief Crowfoot wore his. 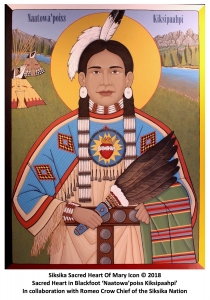 The most recent First Nations icon is the Siksika Sacred Heart of Mary. It was designed as a pair to the first Sacred Heart icon and presents Mary in her Siksika Regalia (based on the Crow Chief family regalia). In keeping with the Siksika imagery, the traditional emblazoned heart used in Latin Rite images is depicted as a beaded pendent. It is similar to the one on the Sacred Heart icon, except that it is superimposed over her regalia without a visible neck strap. The setting has the same camp tepee configuration, but is situated near the Bow River and Castle Mountain in Alberta, which is of historical importance to the Blackfoot People.

An uncharted journey can be stressful the best of times, especially when supporting a family, but being open to it is essential in finding yourself where needed, when needed. My overall body of work in iconography has been varied, seen as eclectic by some.  Some don’t approve of my use of acrylic versus egg tempera. Some will not understand the recent series of First Nations icons. But it is a journey of faith, a journey of trust, and a journey of love. Each icon is a continual spiritual journey for an iconographer.  I’ve learnt through the years of persevering, that I will always be in no particular niche. For some, I am too Orthodox/Byzantine, for others, not Byzantine enough. And I will always be that fellow who can never be Slavic, Greek, or Indigenous. But so long as I keep true to my sincerity of heart, my faith in God, and keep following my due diligence in research and honouring each and every icon, I am on the right path. I know that the Spirit will guide. It may not be a path of financial stability, but the right path nonetheless. I am humbled that He still wills to use my hands in His icons.

Not being an exercise of ego, but one of humility, an iconographer cannot lose sight of the reality of how ones icons, even though most people will never know who you are, are deeply part so many people’s lives and prayer. That is the one thing an iconographer will never know the extent of, nor can it be imagined at any level. The fact is that during that moment between a soul in prayer with God and the prototype, the iconographer has no place.

Want to join the discussion?
Feel free to contribute!