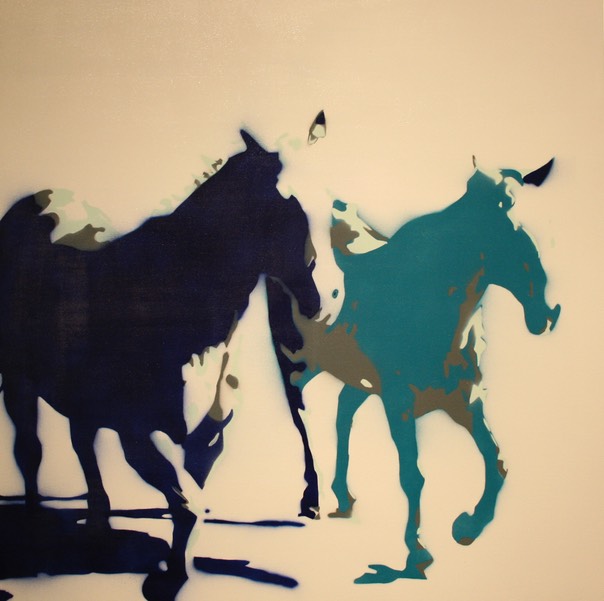 “Could We be horses?”

I left the Mennonite church at age 34, and except for funerals and weddings, have not attended since. Two and a half decades later, there is little I miss about it – except the four part singing. I’ve found community elsewhere, and my belief is that God is everywhere – in forests, in the sea, in the sky – night and day – and in people, most often when least expected. Often times among the marginalized, who, in my opinion, are closer to heaven than many who are in the “inner circles.”

To that end, I occasionally attend St. James Anglican church in Vancouver’s downtown Eastside where the congregants range from retired academics, doctors, nurses, ordinaries like me, and persons who live on the surrounding streets. I have a contact there; a dear friend, Joyce, who is an ordained deaconess. That said, Joyce has tasks to perform before, during, and after the service, so I don’t expect any interactions with her when I attend. This past Sunday, though I’d had overnight guests, and we’d been up late, I did. I always have good reason to light candles for family, friends, and self – the closest I come to prayer. As Rumi the poet said, “There are 1000 ways to kneel on the ground.” For me, lighting candles is that. I’ve also begun kneeling during the liturgy; there’s something grounding about that. A reminder I’m human, as well as a nod to my belief that there is a Greater One at work in ways I can’t even begin to fathom; kneeling is homage to that Mystery. But to the point of this story, to the encounters I had Sunday morning with what I want to refer as “The Trinity.”

I don’t hide in the back pew; I sit near the front. There are ample seats in the small, historical building as at most only 100 people attend. Usually fewer. And no choir this Sunday, only the pipe organ, so the singing was rather droll. Is that a word? I don’t know. Also, there aren’t notes to follow, only words in the bulletin, so I hum along sometimes, but mostly listen. As a sidenote, I want to mention that on this Sunday, a man not far behind me lagged. That is, he was about three words behind, so when others were singing the last word of a line, he blurt-sang a word that had already been sung. “Love!” “Trust!” “Hope,” and so on. He had a raspy voice, and low, low. Like a bass singer in a choir singing a Rachmaninoff song. Cues in the bulletin, also, to stand, kneel, and when to respond to what the cantor sings or reads. I’ve begun feeling comfortable enough to participate in those, too.

As almost always, a man in a wheelchair is two pews ahead of me, before the front pew. He is toothless, his skin is bland and blemished, unshaven, and his hair is gritty, and unkempt. He is perhaps 40? Hard to tell; he has that street-worn look. He looks around during the service, his mouth slightly open, sometimes drooling, and gums his lower lip, gums it so often, there’s an angry red spot beneath his lip, so raw you can’t tell if it’s bleeding. His eyes are sunken, and glazed. His is the kind of face your impulse is to look away from, not into. Yet, he is there, in that spot, and people finding their seats greet him by name.

Behind him, in the front row pew, with crutches laid on either side of her, sits a most elegant woman. Her brassy hair is coiffed beautifully, and the green leafy-print dress she’s wearing is cinched at the waist by a belt comprised of linked brass elephants. I wondered how heavy the belt is, and whether she bought it on a trip to another continent. India, perhaps; or on an African Safari.

She is one of today’s Scripture readers, and reads beautifully. She makes her way to the raised pulpit in advance in order to get there on time, using her crutches. She is slim,  and slightly hunched. And beautiful in addition to elegant.

She is the mother of Ed, the man in the wheelchair. You know this because after she returns to her seat, he asks her a question, loudly, and refers to her as “Mom.” He wipes his mouth after he talks as when he talks, he drools. She answers him quietly.

Following the readings, my friend Joyce rises to the pulpit and delivers a brief sermon. She cites an example heard at a workshop about Trauma of how to deal with people with whom you have a “Challenging” relationship. People with whom it’s not easy to get along with. She advises, as she was advised in the workshop, to think of that other person as an animal. What kind of animal might they be, given their personality and ways of interacting? Then, she said, “Now imagine yourself an animal. What animal would you be that would enable you to interact with that person in a way that is less challenging.”

Immediately, Ed – who appeared to not be paying attention to the sermon, but intent on looking all around – turns sideways, and over his shoulder, says, in voice you can clearly hear two pews behind him, “Mom. Could we be horses?” Then as if she’s not heard him, he repeats it again, “Could we be horses, Mom?” She replied quietly, and he turned back to the front.

You could weep for the way he asks it so seriously, in the tone of voice that suggests his mother could actually make this happen. You imagine him freed from his chair, galloping across the prairie, perhaps sea-bound, his mane flying around him, his feet clopping through dirt, dirt spewing behind him, his tail regal and high, his dark eyes seeing clearly – unbidden – the ruts in the path to avoid, and riding as if sail-driven, forward and forward, free, free, and free.

The sermon had reached its target. For a moment, Ed was free.

The sermon was also given wings. Later, in the Bishop’s room, Mother Joyce found her way to Ed, not knowing how he’d responded to his sermon. Ed had made his way from his wheelchair to a chair against a wall, without his mother, who was scanning the room to find him, asking others if they’d seen Ed.  Meanwhile, Joyce had found him. She greeted him by name, then sat down in the chair beside him, took his hand, and began talking to him in a way, that from across the room, I could see was pure dignifying to Eddie, asking him questions, waiting for him to answer. I knew then that “everyone is welcome here” is true, and not only that, everyone who attends here is known by name. Eddie knows that he’s safe here, safe enough to wheel away from his mother and that when he has found a chair during the coffee hour, he will not sit alone for long. Not only Joyce talked to him, but so did many others. It was the hand-holding, though, that got me. The reminder of how important it is to touch one another, a gesturel that says: you are human, we are all connected, no matter how we present.