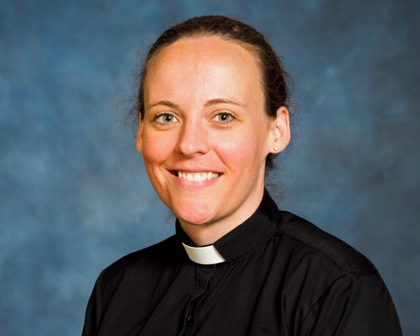 This week I have been reflecting on reconciliation with God during studies with the Reconciliation: The Arch Bishop of Cantebury’s Lent Book 2019, written by Muthuraj Swamy.

This week, the study that struck me the most was presented alongside Genesis 3. Adam and Eve eat the fruit and are expelled from the Garden of Eden.

Swamy writes about the impediments to reconciliation with God and with each other, highlighting that both Adam and Eve tried to blame someone else for their part in eating the fruit. He even goes so far as to accuse Adam of indirectly blaming God, when he blames Eve saying, “the woman you gave me.”

How quickly do we move to blame others when we screw up? I know for myself growing up, the emphasis on being good was a big motivator in distancing myself from my own wrong doing by blaming someone else, or by making excuses.

Blaming others instead of taking responsibility and naming our mistakes and wrong doings, distances us from one another and from God. With this in mind I began thinking about the sacrament of reconciliation (also referred to as confession) in a new way.

Lent is a time when many of us choose to make our confession even if it is the only time of year we do it. At St. James’ it is part of our Anglo-Catholic tradition, and some confess more regularly than only in Lent.

As with Adam and Eve’s responses to God when asked “did you eat of the fruit that I commanded you not to eat?” We sometimes find it hard to admit, yes, yes I did do that. Or yes we did that. What if, when preparing for making our confession, instead of trying to think of all the “bad things” we’ve done we reflected on the times we have been unable to admit our wrong doings. Had Adam simply answered “Yes” when God asked him about the fruit, there would have been room for reconciliation and forgiveness.

Where do we need to make room for the radical forgiveness that God offers?